Contact Cochran, Kroll & Associates P.C. is no longer accepting new cases for 3M Earplug Lawsuits. If you have any other questions about our other legal practice services please call us toll-free at 1-866-466-9912 to begin to receive a free case evaluation. Remember, you don't pay a dime unless we win compensation for you. We're here to help you seek justice!

In July of 2018, a 3M army earplugs lawsuit was settled against the Minnesota-based company 3M for providing faulty Dual-Ended Combat Armsâ„¢ Earplugs v2 (CAEv2) to military men and women who were deployed to Iraq and Afghanistan from 2003 to 2015. 3M agreed to a $9.1 million settlement to resolve allegations that they knowingly sold defective earplugs to the United States Military and service members.

Get a Free Consultation

Hundreds of other 3M earplugs lawsuits have also been filed by veterans who believe 3M and the Combat Arms earplugs version 2 should be held accountable. The faulty design, sale, and implementation of these earplugs has caused a great deal of suffering for a number of veterans.

3M claimed that their Dual-Ended Earplugs would provide hearing protection from loud noises for both close-range firearms and loud explosions while still allowing servicemen and women to hear sounds like voices, depending upon which end is used. 3M’s Combat Arms earplugs did not do what they were supposed to do and caused injuries such as induced hearing loss and tinnitus.

According to the Department of Justice (DOJ), the product did not fit properly and would often loosen, allowing damaging noises to enter the ear canal, therefore, defeating their protective purposes. In addition, military personnel in the field relied on them to function in high noise environments, taking no extra precautions to lower the risk of damage to their ears.

â€œIf the allegations in the 3M army earplug lawsuit are correct,â€ says Personal Injury Attorney Terry Cochran, â€œthat means countless American veterans are victims and may suffer from hearing loss, Tinnitus or loss of balance due to faulty design and dishonest behavior. Both of which could have been avoided.â€

The 3M earplug lawsuit argues that Minnesota-based 3M Company designed the earplugs in a defective manner and did not warn users of the defect or provide safety instructions for their use. This led to the misuse of a defective product in an extremely unsafe environment. Veterans in combat or in training who used these military earplugs often suffered from tinnitus, hearing loss, and balance issues. 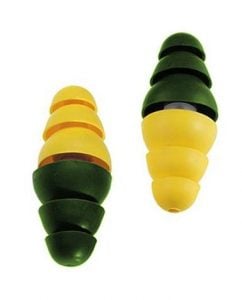 Additional allegations by plaintiffs at the the court trial claim that 3M and their predecessor, Aearo Technologies, Inc., were aware of the faulty design even before becoming the sole provider of selective attenuation earplugs for the U.S. Military.

The DOJ claims that Aearo tested the earplugs in the year 2000 and the test results came back with a noise reduction rating (NRR) of 0, meaning the earplugs held no protection against loud, damaging noises. Despite these shocking results, 3M falsely claimed that the earplugs met military standards, a violation of the False Claims Act. Without disclosing the defects that decreased the hearing protection, 3M was able to sell millions of dollars’ worth of their dual-ended earplugs version 2 (CAEv2) to the U.S. Defense Logistics Agency.

By 2013, it is estimated that more than a million veterans had a service-connected disability rating for tinnitus. By that time, 3M’s earplugs had been standard issue for about a decade. In 2006, the U.S. government entered into a contract with 3M, supplying an estimated 15,000 earplug packages with 50 pairs a package, for about $9 million in sales for that year.

Earplug Lawsuits: Am I Eligible for Compensation?

The 3M earplug lawsuit court case entitled thousands of veteran victims to be compensated by 3M for the sale and use of a defective product.

â€œCompanies who knowingly hide important information regarding the impact of their products should be held responsible,â€ notes Personal Injury Attorney Eileen Kroll. Let Cochran, Kroll & Associates fight for your rights, as so many of you have fought for ours.

If you or a loved one meet the following criteria, you may be entitled to seek financial compensation:

If these conditions apply to you, contact our legal team at Cochran, Kroll & Associates, P.C. to learn about what kind of compensation you may be eligible for.

If you believe you are a victim of faulty Combat Armsâ„¢ Earplugs, it is critical that you seek legal help quickly. There is no obligation for a case evaluation and no fee is charged unless a recovery is made. Our team is familiar with the 3M earplug lawsuits in Michigan and can help you receive compensation. Call us today at (866) 308-6261 to schedule your no-obligation case evaluation.